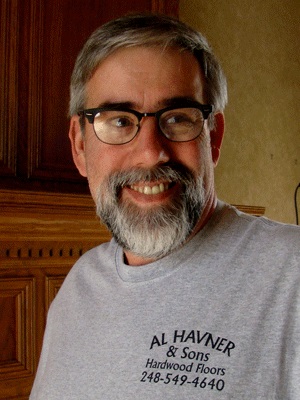 It all started back in the late 1930's with my grandfather on my mothers side, Pat Amsden. Grandpa worked on his knees his entire life in the flooring industry and passed away when I was just out of high school. I never really had the chance to work with him but as a kid I had went out on several jobs with him just to push a broom around in circles and pick up scrap.

When my dad met and married my mom, my dad went to work with my grandpa and my uncle, (grandpas brother)who was another lifer in the industry. Dad was the smarter one of the bunch, he went out and got a real job with real hours and a real retirement, but continued to do flooring work on his days off. Grandpa also had two sons who were into the flooring business back in the 70's and I worked for them from time to time for as little as .50 cents an hour.

By the time I quit working for other people and started my own company I was a single dad raising two children on my own in 1987, in 1998 I met the most wonderful woman in the world who had 3 boys and we became partners in everything we did. Now we have 4 boys and 1 girl and as the kids started becoming of age I started training them in the floor business and putting them to work, and to this day almost 20 years later they are all still in the business.

Through out the years we have hired many others, mostly nephews, cousins, and a few others outside the family and one who became part of the family, he married my daughter.

Our quality of work has improved every year since I started my own business, I was always the kind of guy who wanted to do better. Although I'm no longer physically able to do the work myself, that's ok because my boys are much better than I ever was. They all have the same drive that I always had, and strive to do better and better work. Right now I would put any of my boys work up against the best in the business.